Independence day india of Paragraph is about the great day 15 August 1947. This day is the sweetest fruit for all nation. India is a nation which got its independence after long struggles, sacrifices and efforts.

Read below short and long Paragraph on independence day india. 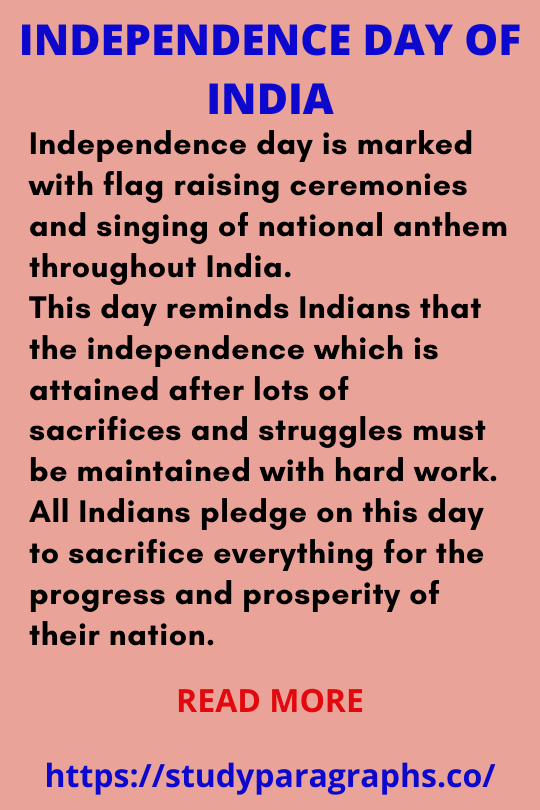 India is the nation of prideful people. The independence struggles is the real testimony to that fact.

Before independence India was under the yoke of British, the leaders and common people of India stood united against the British and compelled them to leave their motherland.

India is one of the largest democracies in world today. 15th August is the memorable day in the history of India because it is the very day on which India appeared as an independent state on the globe of the world.

The history of independence of India is full of sacrifices and struggles which were paid by people to get their freedom. As Indian were under the dominance of British for more than two hundred years, British oppressed Indians and treated them badly.

They didn’t give due rights to Indians and treated Indians like slaves.

The long days of captivity ended and Indians started raising their voice in the leadership of Mahatma Gandhi, JawaharLal Nehru, Bhagat Singh and many others leaders who led Indians to get their freedom.

The ultimate aim and purpose of all Indian leaders was to drive out British who ruled over them unfairly and free their sacred land from their unjust power.

In the leadership of Mahatma Gandhi Indians got power and became united against British and worked every waking moment to get independence.

Gandhi started independence movement, civil disobedience, non-violence movement and different campaigns to undo the power of British, he weakened them.

Subcontinent was a long territory, there lived millions of Hindus and Muslims in subcontinent. Muslims were also fighting for their independence, Muslims too demanded and separate nation.

The whole subcontinent was divided into two parts, in the result of  the partition of subcontinent two nations came into being.

On 14th August Muslims got their separate state and on the following day on 15th August Hindus got their independent state.

At last the long awaited dream of Indians came true and they got independence on 15th August 1947.

After independence, the first prime Minister of India JawaharLal Nehru raised the Indian National flag above the lahori gate of the Red Fort in Delhi.

In India 15th August is celebrated as the independence day, this days reminds them of their sacrifices they paid to get freedom from British.

This day reminds every citizen of India that the freedom which they are enjoying is hard earned.

On this day the element of patriotism rises in the hearts of Indians, they pay tribute to their leaders who gifted them with independence.

The 15th August is the national holiday of India. On this day in all schools, colleges, universities, offices and societies of India different events are organized to celebrate this day.

Independence day is marked with flag raising ceremonies and singing of national anthem throughout India.

This day reminds Indians that the independence which is attained after lots of sacrifices and struggles must be maintained with hard work.

All Indians pledge on this day to sacrifice everything for the progress and prosperity of their nation.

Independence Day of India is celebrated on 15 August every year as a national holiday. On this day, peoples of India celebrate the anniversary of their country’s independence from the British Empire in 1947. This day marks the recognition of India’s sovereignty and the right to self-determination of the people.

The freedom movement of India began in 1857 with the rise of the Great Indian Mutiny. It continued through several phases until finally achieving independence in 1947. Since then, the country has been going through various changes and struggles, but has always had its citizens’ support.

The main symbol of Independence Day is the national flag, known as ‘Sovereign Flag’ or ‘Rashtriya Flag’ (national flag). It consists of three horizontal bands: saffron (orange), white and green with a blue disc bearing a seven-pointed star at its center. In addition, there are other symbols that have been incorporated into Indian culture such as the Republic Day parade, Republic Day speech, Independence Day concerts and so on.

Independence Day celebrations begin with a sunrise ceremony at Rajpath (the grand avenue in New Delhi) and continue with an elaborate parade featuring marching bands and floats, where many people are dressed up in colourful traditional costumes. There are also many cultural events held throughout the country such as folk dances, folk music performances and plays

India is the second largest country in the world by geographical area, with a population of over 1.3 billion people. It is also one of the world’s most populous democracies.

India gained independence from the British on 15 August 1947 following a struggle for independence which lasted for almost six decades. This was a period of great instability and turmoil in India, with many countries vying for power. The partition of India in 1947 left millions dead and millions more displaced. This period was a watershed moment for India, marking the end of colonial rule and the beginning of independent nationhood.

Independence Day is an important national holiday celebrated in India on 15 August every year to commemorate the day when India became independent from British rule. People across India celebrate Independence Day by displaying their patriotism through various activities such as parades and fireworks displays. In addition, the Indian flag is flown proudly at government buildings and other public places across the country to show respect for the country’s independence and sovereignty.

Independence Day of India is celebrated on 15 August. It commemorates the day on which India gained independence from British rule on 15 August 1947.

It is a public holiday in India. The national flag is hoisted at all government buildings and public institutions and flown at half-mast at other times. On this day, people recite Independence Day speeches, sing patriotic songs and listen to patriotic speeches.

Two days after independence, Mahatma Gandhi gave a speech at the Gowalia Tank Maidan in Mumbai, where more than one million people were gathered, calling for unity among the people of all religions, castes and regions of India, for an end to discrimination against any group, and for cooperation among all Indians to build a prosperous nation. The following day, he gave a second speech at the Town Hall in Delhi, declaring that while India had achieved independence from British rule, it was still a long way from complete independence. He called on people to boycott British goods and buy only Indian products instead.

Independence Day of India is celebrated on 15 August every year to mark the moment when the British declared Indian independence from the British Empire in 1947. The date is also celebrated as the birthday of Mahatma Gandhi, who became an icon of non-violent protest and resistance against oppression.

The day marks the end of more than a century of colonial rule in British India, although it was declared as a sovereign nation only on 14 August, as part of the process that began in 1947.
Independence Day is a public holiday in India and many other countries around the world.

In India, Independence Day is marked by grand parades, fireworks displays, and other festivities. People across the country fly flags and display banners to celebrate their freedom from Britain, which was achieved through years of struggle against colonial rule. In 1947, Indian independence leaders Mahatma Gandhi, Jawaharlal Nehru, and Mohammad Ali Jinnah signed the Declaration of Indian Independence at the historic Red Fort in Delhi.

Independence Day is a national holiday celebrated in India on 15 August every year to commemorate the nation’s independence from British rule on 15 August 1947. It is a public holiday in India and is also known as “India’s Independence Day” or simply “Independence Day”. It is observed throughout India, but most of its celebrations take place in New Delhi where the Indian Parliament is located.

The day is marked by various events across the country, including parades, concerts and fireworks. In addition to India, it is also celebrated in other parts of the world such as Pakistan, Bangladesh and Nepal.

In 1947, when India became independent from British rule after being a part of the British Empire for more than 200 years, there was much celebration across the country. On 15 August 1947, people gathered in large numbers to celebrate this event. They came together in large numbers at many places across the country to celebrate their freedom from colonialism. This day has since become an important factor in Indian history and culture.