The flag that represents a nation is called a national flag. It is the strength and identity of a nation.

The following short and long paragraph about the National Flag of India have been written here for children and students, with the following major points included:

It was adopted as the national flag on July 22nd, 1947. Before this flag, there were many flags that represented India, but this tricolor flag purely symbolizes the history and culture of India. 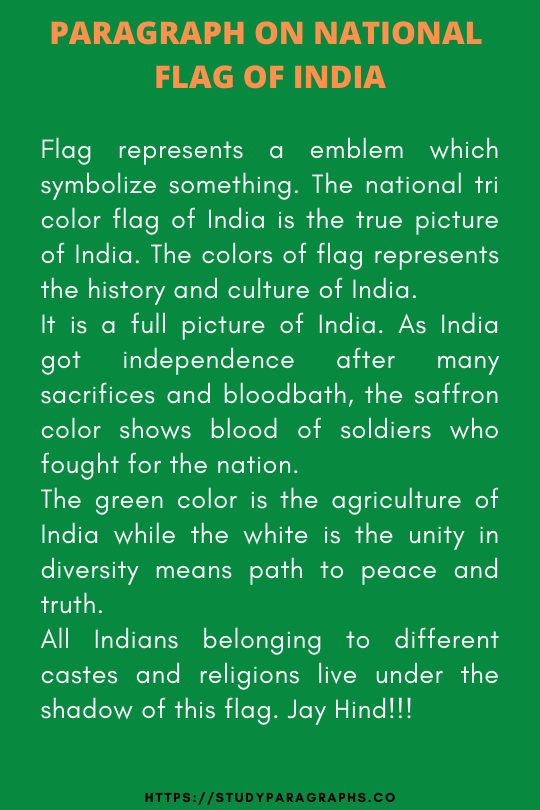 1. The Colors of National Flag

There are three colors in the national flag of India. Each color symbolizes a particular thing. The saffron color represents the sacrifices that were made in the war of freedom, the green color symbolizes the rich agricultural background of India, and the central white color is the path to truth.

The circular structure, called the Chakra symbolizes the 24 hours of the day. It shows we must move forward and work every waking moment for the progress of the nation.

In the center of white, this Chakra is the symbol of encouragement and dedication to work. The white color is a path to peace and truth.

2. The History of National Flag

The national flag of our country, India, has a long history behind it. The current flag is the sixth and final design of the national flag. Five designs were adopted and then abolished by the Indians.

As the flag was finalized after many struggles and efforts, and it represents our nation, we should help maintain its honor and dignity.

3. Shape of Our Flag

The national flag shape of our country, India, is rectangular. The length and breadth of the flag are in the ratio of 3:2. The three colors are placed horizontally. The flag which is hoisted is made of khadi fabric.

The national flag is our pride. It feet must not touch the ground, nor should its cloths be used for any other purpose. We are obliged to bow our heads in reverence when it is hoisted.

The national flag is the identity of every citizen living in a nation. All are represented by one flag.

A flag is used to represent a country on a global scale. Without a flag, there won’t be any Indian identity on the globe. All around the world, this tricolor flag represents Indians and the whole nation.

It gives a full picture of India. As India gained independence after many sacrifices and bloodbaths, the saffron color shows the blood of soldiers who fought for the nation.

All Indians belonging to different castes and religions live under the shadow of this flag. Jay Hind!!!