The land in which a person is born, grows up, is with his childhood and youth, it creates love and attachment. Patriotism is a natural process that is found in every human being and in every living soul.

Patriotism Paragraph | Importance, Meaning & Value In The Eye Of Youths Of Nation

Patriotism is a noble sentiment and an instinctive love that grows and flourishes with the development of personality. Love of homeland is a natural process. Even animals and birds love their home and nests and fight for the sake of it. Sheikh Saadi says that,

the thorn of the homeland is dearer than hyacinth and basil.

The word Patriot is defined as a person or volunteer who loves , support and defends his or her country from the depth of heart. And ready to do anything for the betterment of his country. Those who work for the freedom of the homeland and sacrifice their lives for the betterment of the homeland are great benefactors. These are the great people who are mentioned in history in golden words. There is a famous saying in Arabic that patriotism is a part of faith.

Loving one’s homeland is a natural passion. One who does not find love for his homeland in his heart is numb and dead. This passion creates a great passion and enthusiasm in the heart of man.

This is the passion that motivates man to serve his countrymen and share their pain and does not back down to make the greatest sacrifice for them. In the same spirit, man strives hard for the development and prosperity of his homeland and in times of need, he sacrifices his life for their protection and survival. He gives his life but does not allow the honor and dignity of his homeland to be tarnished.

Man appreciates the value of his homeland when he is forced to live in a foreign country. No matter where he goes for business education, he cannot take the love of his homeland out of his heart . It says

“ To survive in peace and harmony, United and strong , we must have one people, one nation one flag”. (Pauline Hanson)

It says that true patriotism hates injustice in his country.

Every person loves his country because it is our identity. today we are faced with the great danger of the lack of mutual unanimity and national unity and Oneness. we should work hard and do our work honestly for the sake of our country and its citizens. Respect the elders love the youngest. teach love in the age of peace. 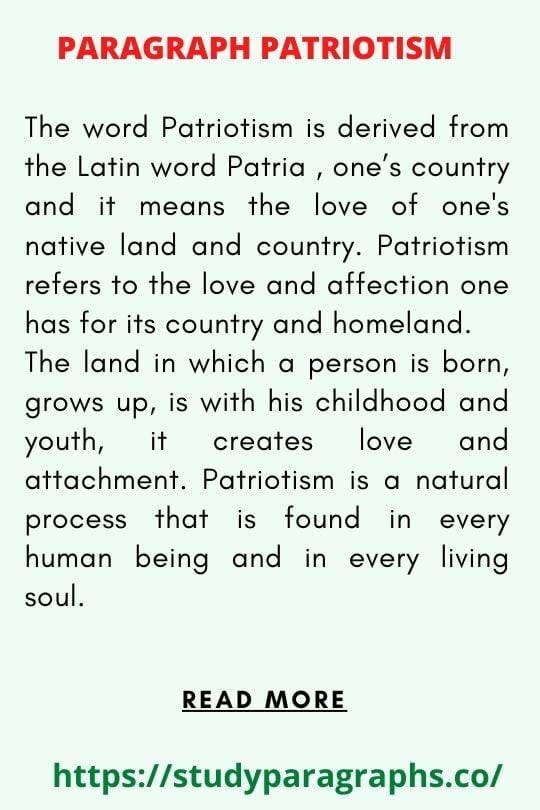 We must protect our country more than our lives and its dignity should not be compromised Today, it is our duty to make as many sacrifices as possible for the development of our country, for education and for the welfare of the people.

Patriotism is the love of one’s country. Patriotism is important for many reasons: it builds pride in your country, self-confidence and a feeling of belonging. Patriotism can also help you to take action when you see injustice or unfairness, to stand up for what you believe in and to work hard to improve the world around you.

Most people think of patriotism as being about having strong feelings for one’s country, but true patriotism can go much deeper than that. It can be about wanting to make the world a better place and taking action to do that. Patriotism can inspire you to do things like volunteer at a food bank or help out at a local animal shelter, or it can motivate you to run for office yourself and fight for change. And at its best, patriotism can even lead to acts of great generosity and kindness.

spirit patriotism is the belief that one’s country should be more than a place to live. It is a feeling of pride in one’s nation and culture. Spirit patriotism can be enhanced by learning about the country’s history and traditions. It can also be enhanced by participating in community events, such as parades and sports games. This form of patriotism helps build a sense of identity between people from different backgrounds.

More recently, spirit patriotism has been promoted through social media, such as Facebook and Twitter. People use these social media sites to share their love for their countries with others. They often use hashtags, such as “love my country”, to promote this type of nationalism.

Spirit patriotism can also be fostered through volunteerism or volunteering vacations. By serving others, one develops a greater understanding of how other people live and learn empathy for others.

patriotism is the commitment to values such as national pride and love for country. It can be a deep sense of pride in ones land or a feeling of unity with others who share similar values. Some people see patriotism as blind loyalty to one’s country, while others see it as a way to preserve an ideal vision of what the nation should be like.

While there are many different definitions of patriotism, they all share some common qualities. They involve putting your values and beliefs ahead of yourself. When you are patriotic, you may value things like family, community, and freedom above yourself. You may also be willing to put yourself at risk to protect these values from those who would threaten them.

Patriotism is a strong desire to protect or care for one’s country or community. Patriotism can be seen as a positive attitude, an emotional attachment or commitment to something bigger than oneself, or a sense of pride about one’s country.
People with patriotism may show a willingness to go to great lengths to protect their country.

For example, people with patriotism may fight in wars or risk their lives in order to help others. At the same time, there are also negative aspects of being patriotic. For example, people with patriotism may have higher levels of aggression because they feel more strongly about protecting the things they care about. Patriotism is often associated with nationalism and jingoism. People who are patriotic can be seen as having a certain amount of prejudice against other people and countries.

While patriotism is usually seen as a positive trait, it is important to note that there are both positive and negative aspects of it. In addition, patriotism should not be confused with jingoism, nationalism, or prejudice.