Paragraph on Allama Iqbal: Poet Iqbal is one of the names in the golden pages of history. Allama Dr Muhammad Iqbal birth date is November 9, 1877 in the historical city of Sialkot.

His ancestral homeland was Kashmir. Your father Sheikh Noor Mohammad was a religious and Sufi man. His mother was also a very religious woman. He received his early education at Sialkot. Then, he joined Government college Lahore and did his MA in Philosophy there. 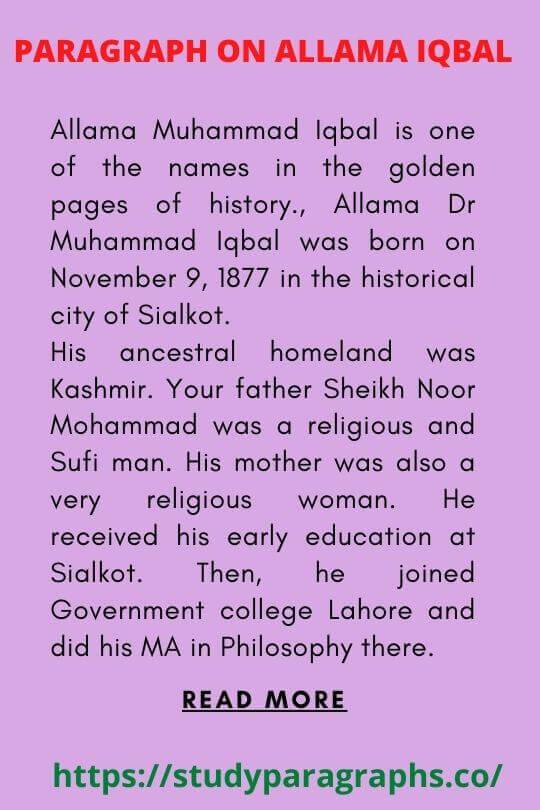 He worked as a lecturer in Philosophy in Government college, Lahore. Then, he went to England for higher studies. From Germany he did his PhD in philosophy he also obtained the degree of Bar-at-law from the Cambridge University. At the same time you gave six lectures on the subject of Islam which became very popular.

His stay in Europe was of great importance. He have come to the conclusion that Western civilization is based on false principles and is destructive to humanity. He returned home in 1908 and stayed in Lahore.

He practiced law for some time but did not make it a permanent profession. He devoted his most of time to poetry, philosophy and religion. In fact, he had great love for the Muslims of the Indian subcontinent. His poetry was the source to awaken the Muslim nation.

He was a great poet. A great force was created in his poetry and gradually the effect of the true teachings of Islam began to appear in his poetry. He composed many poems on the glory of the Islamic power and civilization.

In 1930, Allama Iqbal was elected President of the All India Muslim League. In his address at Allahabad, he presented the two Nation theory. This idea gave a definite direction to the struggle of the Indian Muslim for a separate homeland Pakistan. He prepared the Muslim nation mentally for independence and establishment of Pakistan through his poetry.

Allama Iqbal not only presented the concept of Pakistan but also gave very useful advice to Quaid-e-Azam in this regard. Allama Iqbal awakened the Muslims from their slumber and instilled in them the spirit of freedom and liberty. He tried to make all Muslims realize that they can regain their lost place. He created a new spirit in Muslims through his poetry.

A poet like Allama Iqbal is born centuries later. He is one of our greatest poets. He wrote in both Urdu and Persian. Several collections of his poems have been printed . “Bang-e-Dara”, “Bal-e-Jabril”, “Asrar-e-Khudi”, “Pyam-e-Mashriq”, “Zarb-e-Kalim” , “Sheqwa”, “Jawab-e-Sheqwa” and “Javid Nama” are some of them. Iqbal used the word “Eagle” as a symbol for the energetic Muslim youth. He also presented the concept of “Khudi”. This concept gave a new life to the Muslims of India and make them one nation.

Allama Iqbal introduces Islamic principle and Quranic theories in his poetry. Iqbal guides us toward our faith and our love of Allah almighty. He says that we must have unflinching faith in Allah almighty and having no faith is worse than slavery. He passed away on April 21, 1938. He was buried near the gate of Badshai Mosque, Lahore.