Child Labour Paragraph In English: Here you can read a brief article on child labor with its causes and effect on child and society.

Child labour means indulging children to do duties like grown-ups, which snatches away their childhood. It is a common issue in underdeveloped countries.

In child labour, children are made to perform duties in places that are mentally and physically harmful to them and deprive them of their fundamental rights. These rights include their opportunity to enjoy their babyhood, education, and peace of mind.

People hire children because of the advantage that they have of being able to pay lower wages to them. They are employed by the industries at a decreased wage and then forced to do extra work. 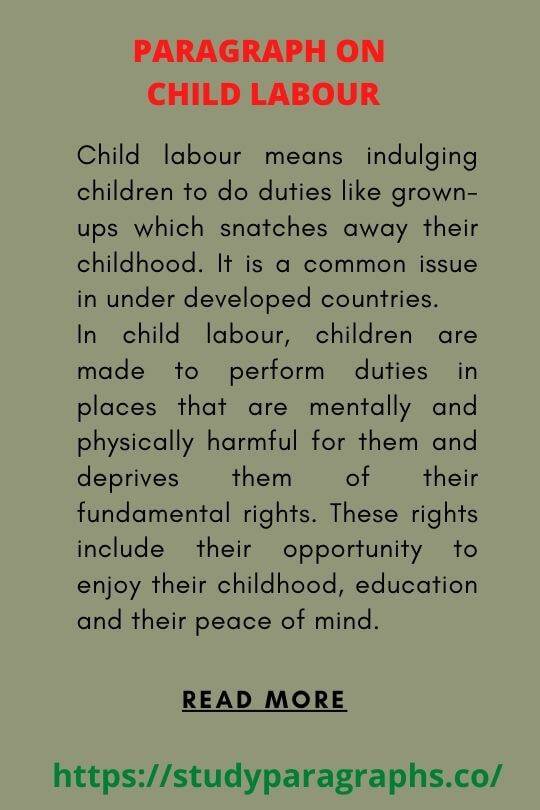 A tortured work environment is very disturbing for a baby’s mental and physical growth. Another issue is that children are unable to shield themselves from most of the conditions that occur in the workplace, like bullying, sexual abuse, and overwork. This affects their emotional ability, and they become social misfits because of their bad experiences.

1. Poverty – One of the main reasons for child labour is poverty and hunger. Families that are large and whose bread earner is only one single male head do not have enough money or resources to support their family. Therefore, they force their children to do work.

2. Illiteracy – Most parents who send their children to work are illiterate. They do not know the importance of education. For them, school education is impractical and unnecessary.

3. Irresponsible Government – The government does not care to spend its resources for the betterment of poor people. All the funds taken are misused or stolen by leaders, as a result of which people do not receive any funds to help them in their daily lives. This results in increased child labour.

4. Child Trafficking – Child trafficking is another cause of child labour. Children are kidnapped and sent to faraway places where they are forced to do dangerous work like begging, drugs or labour. These children are tortured and forced to work in an extremely dangerous environment.

3. How To Prevent Child Labour?

1. Strict Action – The government should strictly prevent the hiring of children under age. Parents who do so should be fined and punished.

2. Free Education – Education is expensive in our country. There should be a system that introduces free education for people who cannot afford school fees.

3. Social Attention – Child labour is morally wrong. This issue needs special attention and should be raised in the media. Moral polishing is important for people who employ children and then use them as a source of cheap labor.

4. End Of Feudal System – The feudal system should be abolished to prevent landlords from employing children to work in their fields.

5. Economic Condition – It is impossible to end child labour without improving the economic condition of a country. The government should improve its economic conditions so that parents can afford to send their children to school.

Child labour should never be promoted. It is an important issue that requires being resolved on an urgent basis. Every child deserves love and care.

They have the full right to enjoy their childhood and live their lives with the proper education. They are the future of our country. A country will not progress unless its young generation is well educated and safe.