Here below you can read a brief descriptive paragraph on computer for children and every class students.

Paragraph About Computer | Advantages And Disadvantage Of Computer

Computers are the greatest gift and most advanced invention in science and technology. It is a useful electronic device that can compute and interpret information quickly.

The first mechanical computers were invented by Charles Babbage in the early 19th century. Our lives have been made so much easier with the introduction of computers.

Nowadays, computers are used in almost every field we can think of, like entertainment, weather forecasting, business, banks, defense forces, industries, education, etc.

Science has evolved so much that scientists are now working on computers with artificial intelligence.

This development will be very beneficial for mankind. Without computers, it would be impossible to perform any job. Basically, they have now become a basic part of our lives. 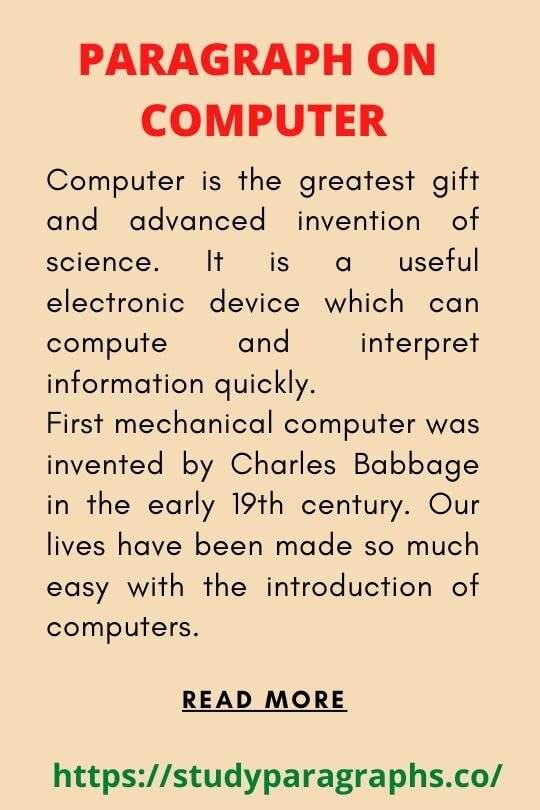 Computers have now become a basic need. They are important in the communication and transportation industries. They control our satellites and traffic signals.

Also, they are necessary to communicate and have meetings in business. Not far is the day when most of us will have robots in our homes, as we already live in a world where Alexa and Siri take care of most of our work.

Hospitals require computers for advanced scans like X-rays or MRIs to diagnose diseases. We use maps to get directions without being afraid of getting lost. Now, computers are also used by defence forces to target weapons.

1. Data interpretation – Computers make it possible to receive or send data at very high speeds. They are capable of performing a series of arithmetic or logical operations.

2. Advance Education – Students can download apps that can help them study and take notes. There is a huge amount of knowledge on the internet, and students can easily increase their general knowledge through computers.

3. Entertainment – We can also use computers to entertain ourselves when we need a break from doing work. In this way, computers help us reduce stress.

Children can also play games on computers, and we can listen to music to cheer ourselves up. You can get any information about what is going on around the world through computers.

People can know what is happening in the world and stay updated instantly through online resources.

4. Cash withdrawal – It is amazing that one can easily use an ATM machine to withdraw cash. There is no need to carry a huge amount of money in your pockets.

6. Increased storage space – Another amazing thing about a computer is its storage capacity which is efficient enough to store gigantic information inside a small hard disk.

1. Too much use – Using too much of a computer can make a person lazy. He will always feel tired and restless. Too much use of computers can also cause weak eyes.

2. Crime rates – There is an increase in cyber crime, pornographic websites, and false identity accounts that trap youngsters.

Some people rely too much on their computers and save all their personal information on computers, including their account details and important documents.

Some people use computers for negative activities, and they hack all that data from a person’s computer to misuse it.

3. Decrease in manual work – There has been a decrease in the use of work by manual force because a lot of work has been taken over by computers. This has led to an increase in the rate of unemployment as well.

Computers have revolutionized our lives. That day is not too far away when a man’s civilized life will be completely dominated by computers.

They are everywhere, including our homes, schools, offices, and now even in our cars. They are irreplaceable, necessary, and our lives are incomplete without them.