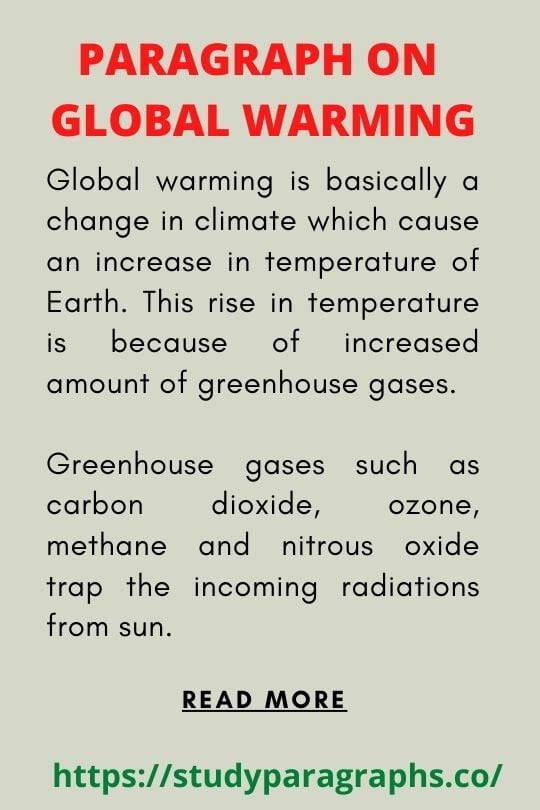 This effect creates a blanket which prevents the heat from moving back into the atmosphere. Greenhouse effect is an important factor for life on Earth.

However, when increased amount of greenhouse gas is trapped, this results in melting of ice which contributes to global warming.

The main cause of global warming is deforestation. Plants use carbon dioxide and release oxygen as a by-product which is essential for living beings.

Unfortunately, due to mass deforestation activities by men, there is significant amount of increased carbon dioxide in atmosphere which causes global warming.

Another cause of global warming is the burning of fossil fuel for energy. A number of toxic fumes are released into the atmosphere due to burning of excess fossil fuel which results in disruption of environment.

A volcanic eruption is another cause of global warming. It releases great amount of carbon dioxide and ash to atmosphere. This results in an increase in the temperature of Earth due to excess amount of gas in atmosphere.

Another contributor to global warming is mining. Methane gas is trapped below the Earth in heavy amount. During mining, this trapped gas escapes and concentrates atmosphere in significant amount.

The means of transportation like buses, trucks and cars release carbon dioxide and carbon monoxide in heavy amounts into the atmosphere which can cause an increase in Earth’s atmosphere.

All these hurricanes, floods, landslides are a direct result of global warming. According to researches, if all the ice melts today then the seas would rise about 230 feet. This will bring a great disaster to mankind.

Disruption of habitats like coral reef could drive many plants and animal to extinction. It will lead to disruption of ecosystem which is the essential element for biodiversity.

Due to extreme events, millions of people are affected worldwide due to increase in malnutrition and death. Higher levels of air pollution can lead to Allergies, asthma and other infectious diseases.

There are several things which we can do to prevent global warming.

1. We should stop open burning of dry leaves or burning garbage because it contributes in releasing harmful toxins in atmosphere.

2. Recycling is another great option which can reduce open burning of garbage. It promotes reusing of plastic bags and glass.

3. Government should make rules to reduce deforestation and save trees.

4. We should plant as many trees as possible to reduce carbon dioxide in air. Trees will improve Earth’s temperature and maintain climate.

5. While buying a car, we should always look for the one that offers highest gas mileage and lowest emission.

The effects of global warming have started hitting humanity and it is too harmful to ignore this issue. Besides, Human beings are the ones exploiting the natural resources and contributing to increase the global warming.

It is the need of hour to take care of Earth with immediate effects to make it safe for our future generations or they will also suffer from global warming.