Introduction About Religion Islam: Islam is a peaceful religion that is an example to all humanity. Islam teaches peace and tranquility to humanity today. A beautiful religion that includes worship as well as all aspects of life. Provides complete guidance to everyone. In the light of that divine revelation, subjugate the forces of nature and use them for the welfare of humanity. 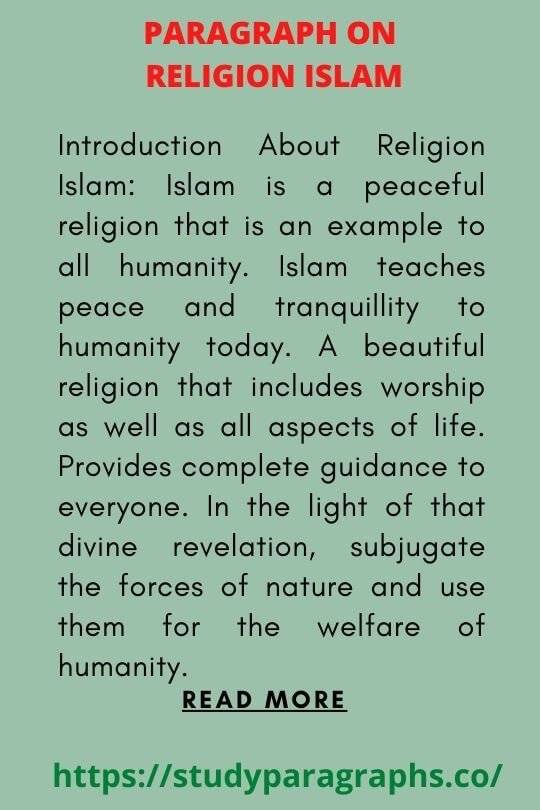 The name of Islam is to submit to the laws of God with full faith in that code of life. Islam does not allow us to spread sectarianism nor does it allow us to do politics in the name of violent Islam. Islam is the religion sent by Allah Almighty to the last prophet of Allah ,Hazrat Muhammad (S. A. W. W) the system of life, whose constitution is the Quran-e-Majeed, complete faith in it and submitting to it and living according to it is Islam.

Islam itself is a religion of peace and tranquillity and urges others to live in peace, love and tolerance. In Surah Al-Imran, it is said that “Indeed, the religion of Allah is Islam.”

“And I have chosen for you Islam as a religion (as a complete system of life).”

Before Islam, the world was dark, there was oppression everywhere, there was no such thing as peace and order. Sometimes in the name of race, sometimes in the name of language and civilization, and sometimes in the guise of patriotism and nationality, humanity was divided into so many pieces and these pieces collided with each other in such a way that humanity screamed, the history of that time. If you study, you will see that the whole world was full of unrest. Islam teaches us the the power and value of prayers.

Islam is the religion or system of life in which one should live in the light of the last message of Allah Almighty the Holy Quran, in the name of humanity through the intercession of the Holy Prophet. The Qur’an is the true book of Allah.

This is the message of Allah in the name of all people. For the first time, Islam gave the world a formal teaching of peace and love and presented it with a lasting code of conduct called “Islam”, the religion of lasting peace and security. This distinction is unmatched by any other religion in the world. Islam started a new chapter of peace and tranquility on strong foundations and tried to expand it with full intellectual and moral strength and intellectual high.

Islam is the complete code of life. Islam is the only true religion for all human beings until the day of Judgment . We should obey every command of Allah Almighty and find the path of salvation, guidance and success for ourselves from the Quran. Our so-called mullahs have put the wrong map of Islam before the world. There is no other religion in the world as peaceful and beautiful as Islam.

There is a complete code of conduct. We are fortunate that we have the last book of Allah Almighty in its complete and original form, now it is up to us how we benefit from it. The Holy Prophet (peace and blessings of Allah. be upon him) said: “A Muslim is one whose tongue and hands keep other Muslims safe.” so, there should not conflict in Islam.