About Mahatma Gandhi Paragraph In English Here is a short and long paragraph on Mahatma Gandhi for student study and knowledge of Gandhi Jayanti for every class of students.

Mohandas Karam Chand Gandhi, also known as “Mahatma Gandhi”, was one of the greatest freedom fighters the world has ever known.

He was a great humanitarian who had a very spiritual mind. He gave this world the true meaning of peace and set great moral standards before us. He always wanted to see India prosper, but unfortunately, he became a martyr because of his fighting for the noble cause of Hindu-Muslim unity. 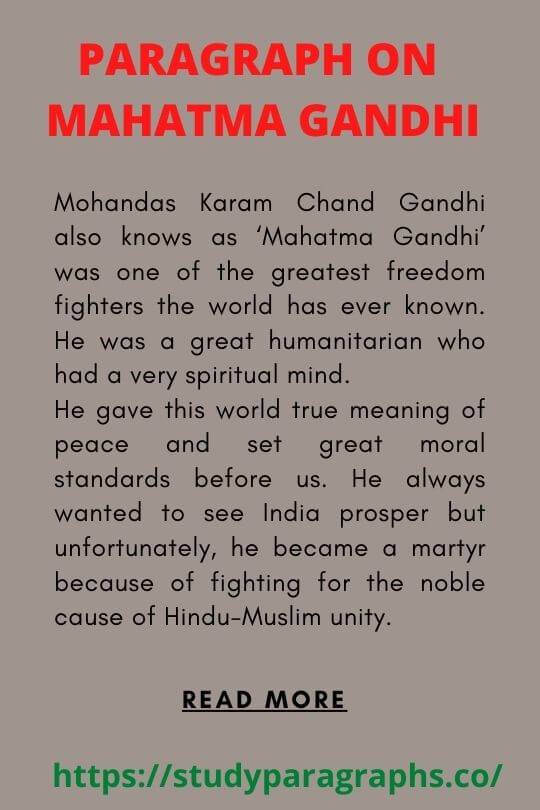 Mahatma Gandhi was born in Gujrat, India on October 2nd, 1869. He belonged to a wealthy family and was the youngest of his siblings. His father, Karim Chand, was a great man, and his mother’s name was Putlibai. She was a religious woman. Gandhi G got married in his early child age of 13 with Kasturbai Manji.

It was the norm of society back then to get married at an early age. He and his wife had 4 children, after which he went abroad to study further.

His early schooling was done in Rajkot. At the age of 18, he passed matriculation successfully and entered into college.

In 1888, he went to London to study and returned to India after becoming a successful barrister. At first, he began to practice at Bombay High Court.

He went to South Africa in 1894 in connection with a law suit. Although his case was over, he continued to stay there.

He faced many hurdles there. He saw that white men used to treat dark Indians very badly. He himself was disgraced badly many times.

He used to believe that all human beings should be treated the same way regardless of their caste, color, and religion.

Therefore, he decided to fight against this injustice. He started campaigns of civil compliance there.

Finally, he returned to India in 1915, after twenty years, and joined the freedom fight. Mahatma Gandhi led the national freedom struggle against British rule, which was completely non violent.

He kept fighting against racial discrimination and to protect his nation from British rule. He was a strong believer in the truth.

He devoted himself to the betterment of villages and the abolition of untouchability. He was arrested many times and put in jail, but he did not lose hope and stayed focused on his goals. At that point, Gandhi

urged the Indians to fight for their rights and stop cooperating with the British. So, he called for a Quit India Movement.

Many people sacrificed their lives in the struggle for independence. Finally, on August 15th, 1947, India finally became a self governing nation with the partition of India into two nations.

Gandhi Ji made a remarkable contribution to the field of education. He himself was a well-read man and a good writer.

His philosophy of ahimsa, satyagraha, and civil disobedience is still a powerful philosophy and has helped many people around the world to fight discrimination. He played an important role in the upliftment of women across the country.

He formed SEWA (Self Employed Women’s Association) in Ahmedabad to support and provide women with better health care.

He was the first leader to call for‘self-rule’ and always took part in fights against discrimination. He wrote several books, including “The Words of Gandhi,” “All Men Are Brothers,” and “Pathway to GOD,” that inspired people to achieve their goals and speak out against injustice.

His Death – Mahatma Gandhi was a patriotic leader with a great personality. On January 30th, 1948, he was shot dead by an Indian when he was on his way to attend prayer.

The birthday of Gandhi is celebrated every year as an international day of non violence. His death news was greeted with sadness among his followers, and undoubtedly, it left a great vacuum in the life of the nation.