Introduction Of My Country Pakistan: The Pakistan is the great and beloved name of our country. Pakistan is an Islamic state which appeared on the map of the world on 14th August 1947 after a great struggle The full name of Pakistan is Islamic Republic of Pakistan.

Pakistan is a country that has 7th largest army of the world. Pakistan has four provinces and one federal territory , the provinces are Punjab, Sindh, Baluchistan , Khyber Pakhtunkhwa and the federally administrated Islamabad.

Brief Paragraph On My Country Pakistan 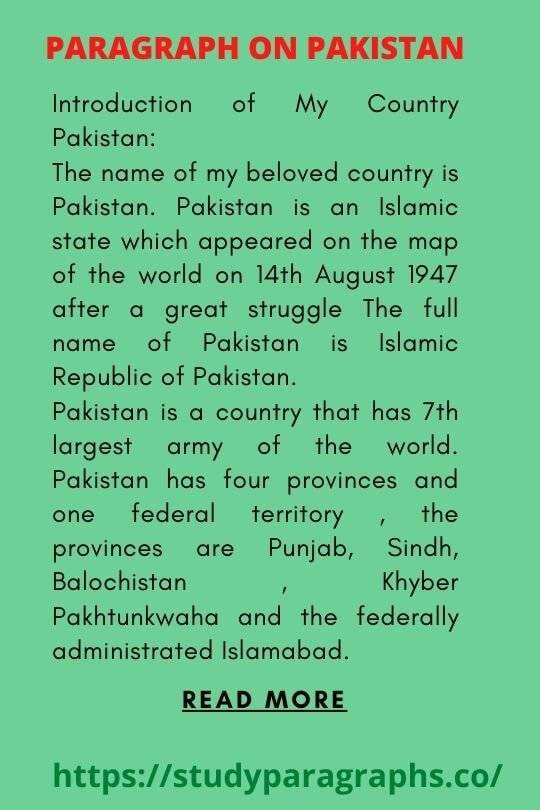 Quaid-e-Azam Muhammad Ali Jinnah is the first governor general and founder of Pakistan. The name Pakistan was suggested by Chaudhry Rehmat Ali in 1933. He proposed the word Pakistan as a name for a new state by combining the first alphabets of its regions as Punjab, Azad Kashmir, Sindh and Baluchistan. With to the tireless struggle and tireless of the founder of Pakistan Quaid-e-Azam, the Muslims got success in achieving a separate county for Muslims the Islamic republic Pakistan.

The Muslims sacrificed their wealth, prosperity and lives for the sake of Pakistan. I love my country from the depths of my heart, because I was born and brought up on its scared land ,the fountains of which had the sacred blood of my forefathers.

Location and Climate Of My Pakistan:

Pakistan is located in the south of Asia. A land of high mountains, rivers and beautiful valleys, Pakistan is a vast country. Pakistan is constrained by Iran to the west, northwest with Afghanistan and north and northeast with china and India to the east. The rest of occupied with coast of the Arabian Sea.

Urdu is the national language of Pakistan. More than 60 languages are spoken in Pakistan including Pashto, Sindhi , Saraiki, Punjabi and Kashmiris. There are five rivers flowing in Pakistan. The capital of Pakistan is Islamabad. Before 1960, it was Karachi, which is know the largest city of Pakistan.

Pakistan is an agricultural country which enjoys all the four seasons: summer, winter, spring and autumn season. The flag of Pakistan is green and white with the moon and stars. Green represents Muslims while white represents minorities.

Lifestyle and People Of Pakistan

Pakistan is a country where everyone is free to lead their life according to teaching of Islam and the sunnah of the Hazrat Muhammad ( Peace be upon him). Pakistan has provided all kinds of facilities to its people so that they can live as they wish and moulid themselves into a good citizen and human.

The people of Pakistan are very cooperative , honest ,hardworking and kind. They have strong patriotic feelings. They do not care for sacrificing their life and everything for the sake of Pakistan.

The inhabitants of Pakistan are a living nation. Pakistan is making progress by leaps and bounds in all fields. Nature has blessed Pakistan with every blessing. Pakistan is a stronghold of Islam.

Pakistan is not only the only support of the Muslims of the region but also an arm and a strong rock for the entire Islamic world. We must make Pakistan an invincible fortress of Islam with hard work, sincerity, honesty and dedication