Republic Day celebration at my school: Here you can read 100, 150, or 500-word-long paragraph on “Republic Day”, its importance, and celebration.

Republic Day Meaning – The term “republic” means a country where power belongs to the people, and they have the authority to pick their president. It also means a state that is free of the monarchy. Because of a strong democracy, India has a fair and independent judicial system.

Write A Brief Paragraph About Republic Day Of India

Republic Day is a national holiday and it is celebrated as a national event. This day is of great historic importance to our country. It is celebrated on January 26th. On this day, India became a democratic country and gave itself a constitution of its own. It is a day to celebrate our democracy and the spirit of freedom because it marks the day when India truly gained independence and adopted its constitution.

India got independence in 1947, after which a constituent assembly was formed in order to make a constitution. It took two years to make the constitution and was finally completed on November 26th, 1949, after which it was announced on December 26th. That is when India celebrated its first republic day on January 26th. On this day in 1950, the first president of India, Rajendra Prasad, took the oath and gave a speech.

Republic Day reminds us of the great sacrifices that our ancestors made to gain independence. A kind of patriotic feeling already arises on this day, and people celebrate this day with more enthusiasm to honour our great ancestors and leaders. 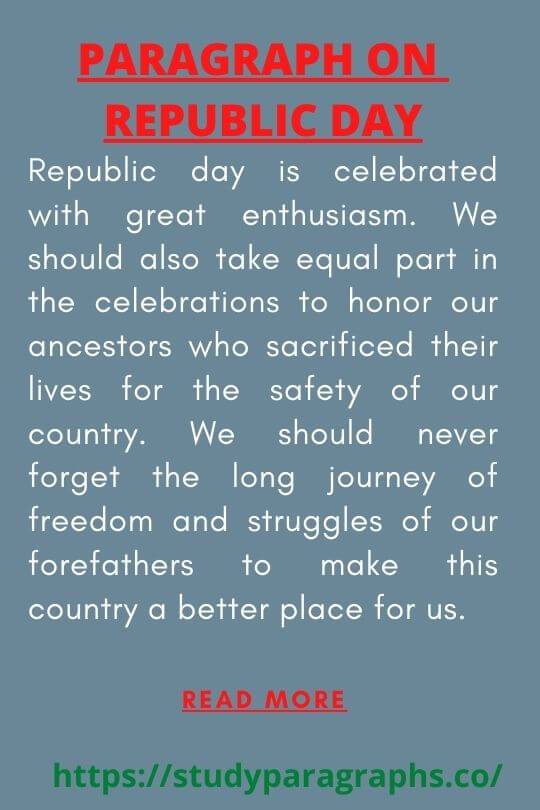 Republic Day is celebrated with great enthusiasm. The air of the country is filled with pride and patriotism. This day brings together the country as a whole, and people of every religion, caste, and creed celebrate this day. Schools and colleges also celebrate this day on a larger scale. Essay, painting, and speech competitions are held on campuses, and students try their best to win these competitions.

On this day, the celebration starts with hoisting the flag and then reciting the National Anthem. The current President of the nation raises the national flag. After this, there are special parades where people from all states participate equally. People began to gather early in the morning at Rajpat to watch this parade. Children from local schools and colleges also contribute to this parade, and they sing national songs. The tunes played by military bands make the atmosphere even more patriotic.

Dignified state heads and high-ranking officers are invited as chief guests. The cultural programmes happening at the parade ground depict the history and culture of India and attract all the viewers. After the parade, bravery awards are also distributed among the courageous people of the nation, the people who protect this country with their lives.

The warplanes display their skills in the sky and amuse spectators. After this, the fly-past by the Armed Forces planes, conveying the national banner, marks the last entry. At night, beautiful fireworks take place, and all the government buildings are illuminated. They look so beautiful that all the people move out to see these lights.

Republic Day is celebrated with great enthusiasm. We should also take an equal part in the celebrations to honour our ancestors who sacrificed their lives for the safety of our country. We should never forget the long journey of freedom and the struggles of our forefathers to make this country a better place for us.