Read a paragraph about terrorism, short and long, 150 words for SSC and HSC students. You can learn here a simple and easy way to write a paragraph on terrorism in Pakistan and India, with its causes and facts.

What is terrorism? – Terrorism can be defined as the unlawful use of force or violence to create fear among people. It has become a threat to humanity by causing economic loss and devastating casualties.

Write A Short Paragraph About Terrorism

Terrorists send their ideological, political, or religious views through violence. They create fear among people and force them to obey their commands.

Nowadays, terrorist acts like suicide bombings have become the norm of the day. Terrorists have not spared any place, including mosques, shopping malls, hotels, educational institutes, and offices. This has created fear among everyone, and no one feels safe anymore. 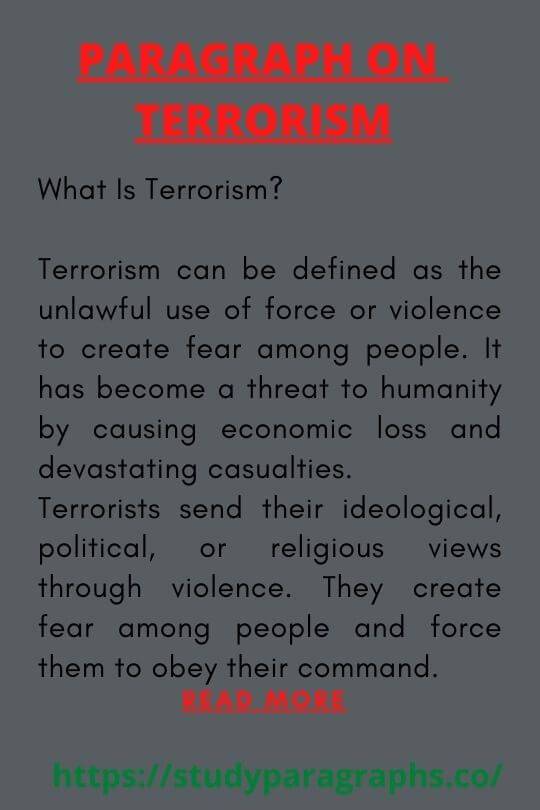 1. Lack of Education- One of the main causes of terrorism is a lack of education. People who are not well educated can not differentiate between what is right and what is wrong.

It is very easy to brain-wash these types of people. Once they are convinced, they believe that dying for their cause is holy and they are willing to do anything.

2. Poverty- Poverty is also the cause of terrorism. Many people are living below the poverty line. They do not have enough money to take care of their whole family.

Terrorist groups hire these people with the agreement to give them a lot of money for their families. These poor people become easy prey for terrorism.

3. Unemployment- Unemployment has made this matter worse. Our younger generation, with qualified degrees, is still unable to find a better job.

This depression leads people to go to extreme levels of extremism and even commit suicide. These types of people are hired by terrorist groups to fulfil their causes.

4. Injustice- Injustice is another cause that breeds terrorism. When the grievances of the people are not redressed, they resort to violent actions.

So, delayed justice is the reason why victims are being dragged into the swamp by terrorist organizations.

5. Religious Intolerance – Young people in madrasas are being brainwashed with extreme ideologies. As a result, they become intolerant towards other religions. These terrorists then attack schools and colleges to create fear among people.

Terrorism has caused many drastic social effects. The economy around the globe is being badly affected by terrorism. Everything has suffered:

social and economic relations, getting an education, freedom to travel anywhere, offering prayers in mosques, everything has suffered.

Everyone is suffering from psychological problems due to terrorism. Fear is created in the hearts of people.

They are afraid to travel alone. They are unable to offer prayers in a mosque without fear.They are terrified of sending their children to schools and colleges.

Terrorism has led to homelessness, unemployment, and other social problems. Many people have lost their jobs, and transport has also suffered a severe blow. Due to terrorist attacks, millions of goods are destroyed and the lives of millions of people are lost.

A country where terrorism and terror exist cannot be healthy. It is a very serious issue and needs special attention.

Education is very important for everyone, and it is the duty of the government to take essential steps to promote education. Terrorism cannot be controlled by the government alone.

People from all over the world must unite together to eradicate this threat from the Earth. Together, we will fight to get rid of this problem.

Terrorism is an umbrella term used to describe politically-motivated violence that is aimed at achieving a goal through intimidation, coercion or instilling fear. While there are many different types of terrorism, the most commonly recognized forms are anti-government, armed struggle and religious extremism. Some of the most well-known terrorist organizations include extremist groups like the Islamic State and Al Qaeda, as well as non-state actors like cyberterrorists.

There are two main reasons why people commit acts of terrorism: ideological or political. Ideological attacks seek to further their organization’s cause by using violent means to achieve a specific objective. Political attacks seek to take advantage of existing sociopolitical issues to push for change. However, while they may have different motivations and aims, they often share similar methods and tactics. They use propaganda to recruit followers, infiltrate infrastructure and spread fear in order to instill fear in the general public and gain support.

These tactics can be seen in both state and non-state actors, as well as online and offline. Though they may differ slightly due to their varying aims and strategies, they all share the same common goal: to make the world a more dangerous place where any action could result in death.

terrorism is a global phenomenon. It has roots in political violence, religious extremism and criminal activity. Terrorism can be perpetrated by individuals or groups. Terrorism can be carried out in any country and can affect many people. It is difficult to predict when, where and how terrorism will occur. It is also difficult to prevent terrorism because it is an evolving threat.

There is no one type of terrorism, but some common features include the use of violence as a means of achieving a political, economic or social goal. Terrorism can take many forms including bombings, hostage-taking and assassinations. Terrorism uses fear and intimidation tactics to intimidate people and achieve its goals. These tactics include: propaganda; threats of violence; kidnapping; and targeting civilians.

Terrorism can be used for various purposes including retaliation against perceived enemies of the state such as political opponents, foreign governments or ethnic minorities; the promotion of a message such as social justice or religion; and extortion or extortion payments such as protection money paid by drug dealers to local gangs to keep their territory safe from rival gangs.

Terrorism is often motivated by radical ideologies such as nationalism, racism or extreme religious beliefs that justify violence. In addition, terrorists may use religion as an excuse for their actions because they consider themselves to be fighting on behalf

The threat of terrorism in India is a common concern among the people of the country. The rise of terrorism in recent years has increased significantly and it has become more and more frequent.

In fact, in 2016 alone, there were 838 terrorist attacks in the country. These attacks included both terrorist groups and individual terrorists. In addition there have been a significant number of crackdowns on terror activities in India. Even so, there are still many individuals who are willing to carry out acts of terrorism in the country. This means that there is still a very real threat of terrorism in India. To combat this threat, it is important for everyone to remain vigilant and report any potential threats as soon as possible. By doing so, you can help keep the country safe from potential threats.

4. Terrorism is a big threat to mankind

Terrorism is a big threat to mankind. It has taken many lives and caused huge financial damage. There are many different kinds of terrorism. Some terrorists want to make people afraid so that they will do what the terrorist wants them to do (like stop people from doing things).

Another way that terrorism can hurt people is if it scares them away from going on vacation or visiting other countries. Terrorism could also stop people from traveling or going out to eat, which can cause businesses to lose money.

Terrorism is a big problem, but we can stop it if we work together and keep each other safe.