Below you can read a short 150-word and a long paragraph on traffic jam.

As the population is increasing day by day, we see traffic jam issues in countries like Bangladesh and India, especially in Dhaka city. Here in this paragraph you can read about the reasons for traffic jams and their solutions.

What is a traffic jam? The term “traffic jam” means vehicles that get stuck on the road. When there is increased transport congestion on the road, the speed of vehicles slows down.

Vehicles start to line up as a result of which the vehicles cannot move for several periods of time. This results in time delays, and everyone gets late for carrying out their daily routine.

Getting stranded in a traffic jam causes a decrease in the rate of productivity in any field because it takes much of the time that could be utilized efficiently. Now, traffic jams are a daily occurrence.

Life in the city has become very complicated. Since all the people from rural areas have shifted to urban areas, the ratio of the urban population is larger than the rural population.

Therefore, the first problem we can find in a big city is the uncontrolled growth of the population. This increased population ratio has also caused an increase in traffic problems.

Another cause of traffic jams is the increased number of cars on the road. Nowadays, people want their own personal car to get around in. With a greater number of cars, the chance of congestion also increases.

Thirdly, the roads in cities are narrow, uneven, and not in good condition. They cannot withstand the pressure of traffic, which results in traffic jams. Apart from that, accidents, weather conditions, and road work also cause traffic jams. 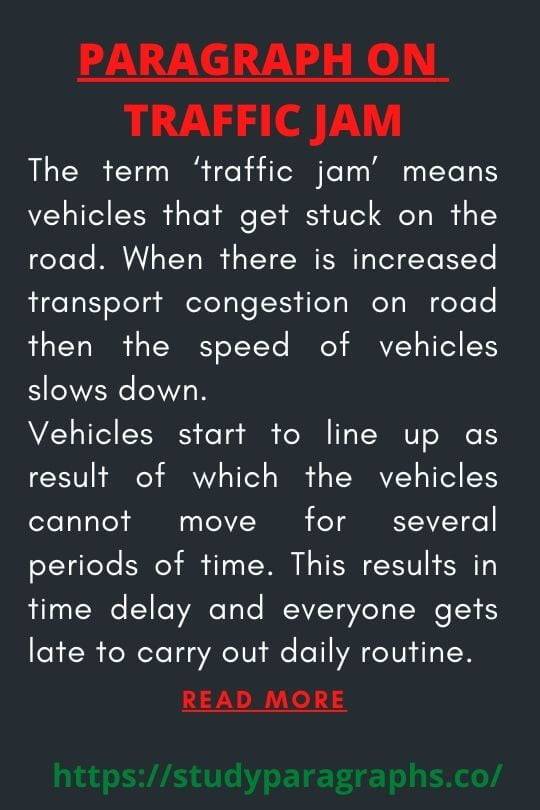 Traffic jams affect our daily lives. The saddest part about traffic jams is that they also affect the speed of ambulances and emergency vehicles.

There are numerous occasions that can be prevented, but due to heavy traffic jams, ambulances get stranded helplessly for hours, resulting in the loss of human life.

Another issue could be of fire prevention. Due to the traffic jams, the fire department force gets stuck on roads as a result of which the matter gets worse on the other side and has disastrous effects.

Many people waste their precious time due to traffic jams. It causes time delays, which leads to late arrival at business meetings, school or any other commitment.

Traffic jams not only waste time but also fuel. This results in increased air and noise pollution, which can cause many hazardous effects on human health.

We can reduce the risk of traffic jams by simply following these steps:

1. We must strictly adhere to all road signs.

2. We should always maintain the speed limit of our vehicles in order to avoid accidents.

3. Parking in front of the shops should be avoided.

4. The villages should be urbanized in order to discourage the migration of villagers to the cities.

5. Use public transportation during rush hour.

6. Roads should not be reserved for V.I.P’s. They should travel in big cities like rest of the citizens.

7. Traffic jams can also be reduced by improving the road infrastructure, like separating lanes according to the kind of vehicle or limiting parking lots beside the road.

Traffic jams are an unfortunate reality of modern life which reflects an ugly mark on the beautiful face of the city. It is a daily problem like load shedding that we face while going to school and working.

Now, it is the responsibility of every citizen to follow the rules and regulations to reduce the risk of traffic jams.

Traffic jams are a common occurrence in cities all over the world. To relieve traffic congestion, cities often build new roads or widen existing ones. However, these actions can lead to longer commute times. In addition, they can cause wear and tear on roads and increase emissions from cars, trucks and other vehicles.

One way to reduce traffic jams is to use telecommuting. By working from home, employees can reduce the number of miles they drive and decrease the amount of time spent commuting. Other ways to reduce traffic jams include: creating more parking spaces; increasing public transportation options; and allowing people to park closer to their destination. Traffic jams are a problem that everyone can help solve.

Traffic jams come in many shapes and sizes. Some cause a traffic tie-up, while others are more subtle, such as when one driver slows down to let the car in front of them go. Regardless of the cause, traffic jams can be frustrating for everyone involved. Drivers may have to sit behind someone who is doing nothing wrong. And those stuck in traffic may feel frustrated or even angry.

For these reasons, it’s important to keep your eyes open when driving. Be aware of your surroundings and try to avoid any possible problems before they start. This will help you avoid any unnecessary delays or headaches.

3. Paragraph About Traffic Jam For Class 7

Traffic jams are an unavoidable part of modern life, and they can be frustrating for drivers and passengers alike. When there is a traffic jam, drivers may have to sit in their cars for hours on end with no end in sight. This can cause severe frustration and anger among drivers, who may become even more likely to speed or tailgate as a result. Passengers may also be frustrated by the long delay, since they could be stuck in the car while they wait for the jam to clear.

To avoid traffic jams, people should plan ahead and allow plenty of time for travel. They should also avoid driving at peak times, such as rush hour or on holidays. They should also allow enough space between their car and the one in front of them so that they do not get stuck behind another vehicle. Finally, they should avoid distractions like cell phones and social media when driving so that they can stay focused on the road. By following these simple tips, everyone can minimize their chances of getting stuck in a traffic jam.

Traffic jam is a common issue on highways, roads and streets. This occurs when a large number of vehicles try to go in the same direction at the same time.

The causes of traffic jam are numerous. They can include weather conditions, construction, road accidents, new developments or events on the road, bad driving and poor maintenance. Traffic jams can also be caused by human error. For example, one driver may try to pass another car too quickly. Or an accident could occur if someone fails to yield to another driver. Still other causes include overloading of vehicles or delays caused by pedestrians who don’t follow traffic regulations.
Traffic jams can be hazardous for drivers as well as other road users.

They can lead to more accidents. They can cause traffic delays that add to travel times. And they can also cause frustration among drivers and passengers who want to get somewhere fast but are stuck in slow-moving traffic.

Traffic jam is a common problem affecting cities. These jams can be caused by various factors such as construction, traffic accidents and road construction. All these factors can lead to traffic congestion, slowing down the flow of vehicles and leading to increased fuel consumption. There are several solutions for traffic jam.

One solution is to use public transport systems, which can reduce the number of cars in the streets. Another solution is to use alternative routes. These routes are often less congested and can help you reach your destination sooner. There are also technological solutions available.

For example, new technologies such as autonomous cars can help you travel faster without causing any delays or accidents. These solutions can help you minimize the impact of traffic jams on your daily life and save money by reducing fuel consumption.

Traffic jams bring about a lot of problems for people who are stuck in them. They can be frustrating, dangerous, and even illegal, depending on where you are. They also take up a lot of time, which can leave you with less time to do other things. These are all reasons to avoid them whenever possible.

If you have to travel during rush hour, try to get there early so that you don’t have to spend too much time waiting in traffic. If it’s necessary to go somewhere during peak hours, plan ahead and leave plenty of time. Also, keep in mind that if your car is blocking traffic behind you, police might ticket you for it.

If you’re not able to avoid traffic altogether, try looking for alternate routes. This will help you get around more quickly and avoid any delays or tolls along the way.