Truthfulness is a moral and ethical principle that includes truth and honesty with others. For your integrity and the benefit of others, it is very important, to be honest at all times.

Read the short and long paragraphs on truthfulness below, which were written by our writer, an English teacher.

The Bible says, “Let your ‘yes’ be ‘yes,’ and your ‘no’, ‘no.’ Anything more than this is from the evil one. ” (Matthew 5:33–37) It also says, “The Lord detests lying lips, but he delights in people who are trustworthy.” Proverbs 12:22) One of the most important things in life is trustworthiness, and the only way to gain trust is to demonstrate integrity. 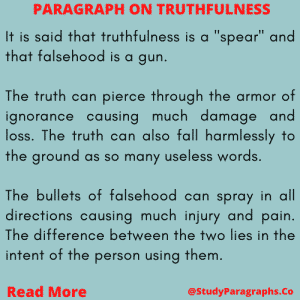 Truthfulness is associated with God’s law and word, truth, and its synonyms, and generally with a truthful statement. The word “truth” itself has several meanings, such as, “the true or actual state of a matter,” “the body of real things, events, and facts,” “the quality of being honest and having integrity,” “a true statement or account,” and “the honest or sincere intention.”

Truthfulness is important in the society because if people could not trust each other, there would be no sense of order. In a world where there is already so much chaos and controversy, truthfulness or honesty can help individuals maintain their integrity and gain the respect and trust of others.

It is said that truthfulness is a “spear” and that falsehood is a “gun.” The truth can pierce through the armor of ignorance, causing much damage and loss. The truth can also fall harmlessly to the ground like so many useless words. The bullets of falsehood can spray in all directions, causing much injury and pain. The difference between the two lies in the intent of the person using them.

The truth is like a sword that can be used to defend or attack. On the one hand, when used by an experienced person who uses the truth to help and enlighten people, it can overcome ignorance and prejudice and lead to a better world. On the other hand, it can destroy life when used maliciously by a destructive person to hurt people and persuade them to do wrong.

Truthfulness Is A Good Habit

A child is not born with truthfulness; it has to be acquired. Parents need to teach the child the importance of being honest and, at the same time, they need to be role models in giving the child a good start in life.

Truthfulness is a great value that operates in every aspect of life. it can be an individual, a family, or a society.

Parents need to tell the child early on that being truthful is good quality and that all parents teach their children to be truthful. Parents should ensure that the child understands the importance of truthfulness and the value of good habits and rewards. Parents should also discuss the consequences of lying with the child, especially in cases where a child has been asked to lie or when a lie is appropriate.

A child may be encouraged to give reasons why a false statement was made instead of a truthful one. The parent should ensure that their child is familiar with the difference between the use of words like “don’t know” and “I don’t remember.” A child should also be encouraged to always tell the truth to their parents.

An open communication environment should be created between the child and the parents, in which they are free to express their views without fear of judgment.

The best way for parents to ensure that their children understand the value of truthfulness is to set a good example for themselves.