Empowering women means making women powerful so that they can decide what is good and bad for their lives. Read the following women’s empowerment paragraph to learn more about the topic.

In some places in the world, women are treated very badly. They are considered non-existent and suffer at the hands of men.

Men are considered superior to women. In old age, women were treated far worse than animals. They were deprived of their basic rights. They were victims of oppression and aggression by men.

With time, women came to know their power and prestige. As women understood their power, a revolution and change known as women’s empowerment helped give them their basic rights.

Women were dependent on men; they were obliged to follow the dictations of men, but now they are not dependent. They are going to be independent and free and can make their own decisions because they have been gifted with knowledge.

Education is the only power that empowers women and makes them aware of their position in society.

In all western countries where women are independent and free, women are considered equal to men, and they fully participate in the progress and welfare of the state.

In third-world countries like India, Pakistan, Bangladesh, etc., women are not empowered fully; they are still languishing in the old set norms of society.

In these countries, women are in danger of honor killings; men mercilessly kill them if they happen to harm their reputation and status quo.

In many countries where women are still not free to get an education and to work with men, Men are still dominating over women; they are living a life of slavery.

How to empower females?

There are many ways to empower women. The most effective way to empower them is to give them quality education. If women are literate and educated, they will be able to fight for their rights and get rid of prevailing injustice.

In addition to that, there should not be gender discrimination; there must be equal work opportunities in every field, irrespective of gender.

Apart from that, there is a big threat to child marriage. Child marriage must be abolished and condemned so that young girls get an opportunity to get a higher education and stand on their own feet.

All poor families whose girls are not able to attend school should be supported financially so that those poor girls get an education and become independent; otherwise, they will suffer at the hands of cruel men.

If they are treated unfairly by their husband, women must have the right to divorce them. Because of fear of society and social norms, women suffer in abusive relationships and are discouraged if they divorce.

They should have the right to make decisions for their protection and safety. Restore the dignity of women and give them protection at home and in the workplace.

There are many advantages to empowering women, as they can fully participate in the development of the nation.

They can earn and can help reduce the level of poverty, increase the productivity of their families, and support the state.

The only tool for the development of the nation is the empowerment of women. If women were empowered, they could do wonders.

Only an educated mother can help look after her children well and can make them responsible and respected citizens.

“A woman is a full circle; within her is the power to create, nurture, and transform,” someone once said.

Educating a woman is akin to educating a whole family. It is also believed that women are far superior to men because the 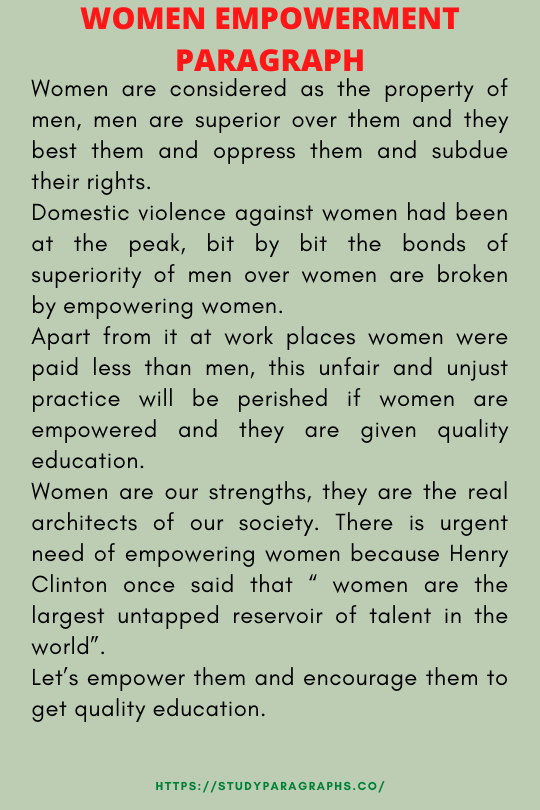 Women are considered men’s property; men are superior to them, and the best, oppress and subdue their rights.

Domestic violence against women has been at its peak. Bit by bit, the bonds of the superiority of men over women are being broken by empowering women.

Aside from that, women were paid less than men at work; this unfair and unjust practice will be eliminated if women are empowered and receive a quality education.

Women are our strength. They are the real architects of our society. There is an urgent need to empower women because Henry Clinton once said that “women are the largest untapped reservoir of talent in the world”.

Let’s empower them and encourage them to get a quality education.