A flood is the accumulation of a large body of water around areas, causing a lot of destruction and etc. The following paragraph on the topic of flood, causes, and impacts are very helpful for children and students.

The accumulation of water over a dry area due to rain or from any body of water that causes a lot of destruction and damage is called a flood.

Floods cause loss of life and property. Mostly, floods are caused naturally; rarely is this disaster man-made.

When water breaks embankments of water bodies and rushes to plain areas, it is called flooding.

How can we reduce the risk of loss of life and property and how can we prevent floods?

As man is helpless and feeble enough to help face this natural calamity, we can prevent floods by constructing dams and water reserves.

It will help save hundreds of lives and will also help save people from being homeless. Apart from that, plantation is very necessary to minimize the damage caused by floods.

Trees are very useful in flood prone areas to prevent the level of damage caused by floods. There should be flood warnings to reduce the damage.

We can prevent floods by widening the banks of rivers, planting trees and improving the drainage system.

Construction of new dams near water bodies is also beneficial to prevent floods. There should be canals on each river bank to divert the flow of rain water into canals so that major losses are not caused. 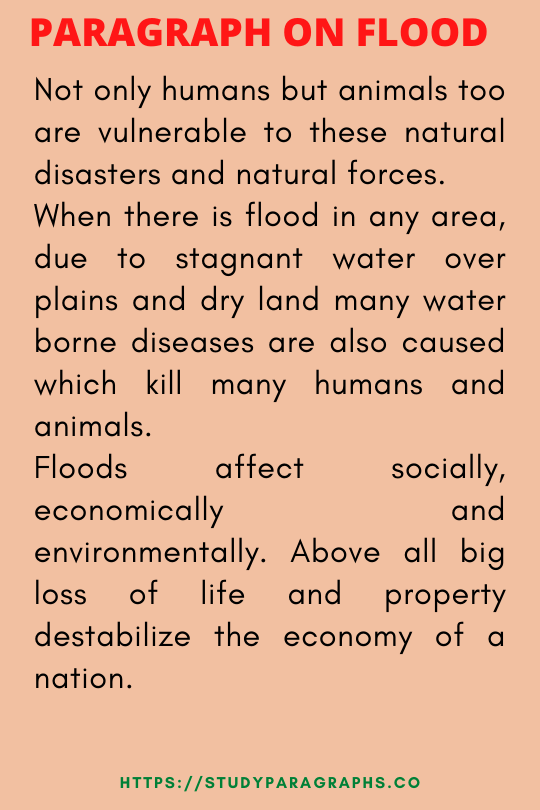 During the monsoon, when it rains heavily in flood prone areas, rain water reaches rivers and lakes. When water beyond the capacity of rivers starts flowing into rivers, embankments are broken, and water overflows water bodies and inundates plain land.

Due to climate change and global warming, the frozen ice snow on mountains is melting heavily. The melting of glaciers is also a cause of flooding.

Floods are always destructive in nature. Thousands of people become homeless due to big floods. Many people’s normal routine lives become miserable. Many houses are submerged in water.

It not only harms houses and property, but it also badly affects agriculture. When agricultural land is flooded with water, the crops are entirely damaged, which affects the economy of the state.

Floods badly affect the economy and development of a country. Sometimes it takes years to replace the physical damage and to stabilize the destabilized economy of a nation.

Due to floods, too much loss of livestock is also recorded. Many animals lose their habitats and die due to floods.

The infrastructure of the country is also damaged; the roads and bridges are broken, transportation is affected, and communication links are also disrupted by floods, which make life miserable.

In urban areas, especially low lying towns and areas that are flooded by slight showers of rain, water accumulates in streets; this is also called flooding. It disturbs the routine lives of people in urban areas.

Not only humans, but animals too are vulnerable to these natural disasters and natural forces.

When there is a flood in any area, due to stagnant water over plains and dry land, many waterborne diseases are also caused, which kill many humans and animals.

Floods affect us socially, economically, and environmentally. Above all, major losses of life and property destabilized the economy of a nation.

Flood or flood damage is damage to a structure caused by water. Floods can be caused by heavy rain, snow melt, overflowing rivers or other bodies of water, or flash floods. Floods can cause significant damage to buildings and areas along streams, rivers and lakes.

Flooding also causes soil erosion and disruption to transportation routes and utilities. A flood is one of the most common natural disasters in the world. Around 600 million people are at risk of flooding every year; 1 billion people live in flood prone areas. More than half of these areas lack flood defenses, making them highly vulnerable to flooding. In 2005 there were more than 50 million floods worldwide, affecting more than 100 million people each year. In the United States, floods cause billions of dollars in damage every year; In 2015 alone, it was estimated that over $20 billion was lost to flooding in the US Midwest alone. Flood control may include building flood barriers and educating local residents about flood awareness.

Communities at risk of flooding should also consider installing early warning systems and evacuation plans so that residents can avoid hazards when a flood warning is issued.

Floods occur when there is too much rainfall in a short period of time. The most common cause of flooding is that the drainage system cannot handle the volume of water in an area at once. Another common cause is runoff from heavy rains, which inundate the ground. Other causes of flooding include: To prevent flooding, it is important to monitor weather forecasts and be prepared for storms with proper tools and supplies. Flooding can also be prevented by raising houses above expected water levels.

This can be done by raising foundations or building on higher ground. In addition, clear debris and debris barriers should be maintained to allow flood water to drain easily. The best way to prepare for floods is to have a contingency plan in place. Knowing what steps to take before a flood hits will help you be more responsive during this stressful time.

A flood in a river is a chaotic situation that can be dangerous for anyone nearby. River flooding can cause landslides and destroy bridges, so it’s important to stay away from rivers and other bodies of water when they swell. In addition to personal safety, there are also environmental factors that must be considered when dealing with river flooding.

Fish and wildlife can be threatened by the water, so people should be careful not to disturb them when near rivers and streams during a flood. And since much of the land surrounding rivers is covered in vegetation, it’s important to avoid chopping down trees and damaging crops to protect the soil and watch out for warning signs. However, if you do get caught in a flood, here are some safety tips: Stay away from the shore.

If you must cross a creek or river, walk on the opposite side of the current, not in their path. Crouch down and seek shelter if necessary. Do not attempt to drive through flooded areas as this can cause massive damage to your car.

It’s likely you’ve seen images of people helping each other during a flood. Whether it’s helping someone out of the rain or fetching water in a bucket, many of us have had a positive experience of seeing someone help another person. But what drives people to help each other during a flood? There are two main reasons people help when they see someone in need: altruism and empathy.

Altruism is the desire to do something good for someone else. Americans are often known for being a very altruistic and generous nation, but this is not always the case. In recent years, Americans have become more selfish in their actions, showing less concern for others and more concern for themselves.

This change in behavior is due to both the economic downturn and the growing presence of social media. Because social media allows us to stay in touch with our friends and family 24/7, we are more likely than ever to see negative news events. Social media can make friends feel like they need to meet expectations by posting regularly, which can create internal competition among friends.

This inner competition is one of the main reasons why people help each other during a flood. People feel obligated to help because they want to look good in front of their friends or because they don’t want anyone else

Floods are a serious threat to life, property and wildlife in all parts of the world. They can cause major damage to buildings and infrastructure and contaminate drinking water. In addition, floodwaters can drive away or injure animals that live nearby. Many animals have developed special adaptations to help them survive floods. Deer, for example, have large hooves that allow them to navigate shallow water and wade through stagnant water.

Many bird species also have waterproof feathers that prevent water from entering their bodies. Once you know what to look for, it’s possible to spot signs of a flood before it happens. Listen for unusual sounds like gurgling water and rushing wind. Check the water levels in nearby puddles and streams and make sure the area is dry before entering. If you live in an area prone to flooding, take precautions to protect yourself and your property.

If possible, bring your belongings above ground or install flood barriers on your home. Try to keep your home debris-free so that it doesn’t become a flood barrier during a flood event. If you live in a high-risk area, invest in insurance that covers flood events.