Paragraph about Air Pollution In English: Here we have provided 100 words to 500 words Paragraph on environmental pollution for Student study and exercise.

Air pollution is not only bad but dangerous because the air is a necessary and important component for all living things in the universe.

Air pollution means contamination in the quality of air due to the addition of harmful particles and other pollutants that cause adverse effects on human health. It is one of the most serious problems that most countries are dealing with.

The graph of pollution is increasing day by day, but no one is taking precautionary steps to prevent it. 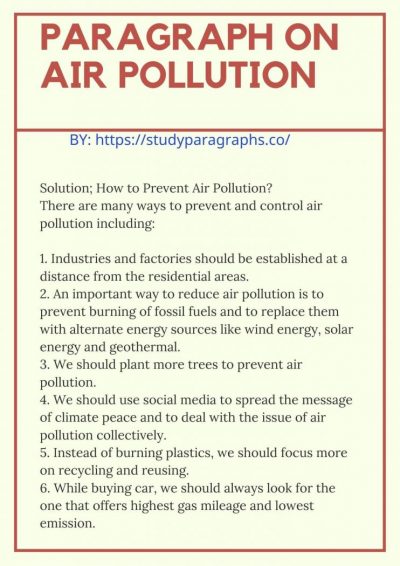 1. Emissions from industries or factories release large amounts of carbon monoxide, carbon dioxide, and other chemicals into the air. This release of poisonous gases contributes a lot to creating a high level of air pollution.

2. The use of pesticides, insecticides, and other fertilisers is very dangerous for the environment. They emit harmful chemicals that make the air poisonous.

3. The toxic gases released from volcanic eruptions contain heavy amounts of carbon dioxide and other harmful gases. These gases get mixed with the air and pollute it.

3. Vehicles are the main cause of air pollution in this world. Heavy road traffic produces a large amount of dust, which can pollute the air quality.

4. A lot of minerals below the surface of the Earth are extracted in the process of mining. Methane gas is also trapped below the Earth in a heavy amount. Such gas is mixed into the atmosphere during the mining process that contaminates the air and causes environmental pollution.

5. Burning fossil fuels like coal or petrol releases harmful and suffocating chemical elements into the air like nitrogen and sulphur dioxide.

1. Air pollution is responsible for the deterioration of human health. Due to the consumption of polluted air, many major health problems occur, like lung diseases, respiratory diseases, and many other chronic diseases. It damages our nervous system and causes irritation to our sensitive body organs.

2. Air pollution is the major contributor to universal warming. An increase in carbon emissions means global warming. That is a major cause that will increase the temperature of our earthly planet.

3. With continued air pollution, the ozone layer is depleting, allowing more ultraviolet rays from the sun to enter Earth. These rays are very dangerous for humans and can even cause cancer.

3. Solution; How to Prevent Air Pollution?

The following are the top points to control and prevent environmental pollution:

It’s a problem that occurs worldwide. The continuously increasing air pollution is causing health hazards to humans around the world. The health of every human being is at risk because of environmental pollution, and unfortunately, mankind is responsible for the pollution.

It is the need of the hour to save our planet. The government and citizens have a collective responsibility to control and prevent air pollution.

Air pollution is an environmental health hazard that could contribute to the spread of disease, especially in pandemics like COVID-19.