Undoubtedly smoking is harmful for health. You can read hear short and long persuasive and argumentative Paragraph about smoking. Give your points about Smoking is silent killer and it should be banned specially at public places.

Read below a brief paragraph about smoking is injurious to health.

Smoking Paragraph | Smoking Is Dangerous And Should Banned On Public Places

Smoking is defined as a habit of inhaling and exhaling the smoke of tobacco by sucking on the end of a lit cigarette, cigar, pipe, hookah or water pipe etc. No doubt smoking is a bad habit. People can take smoking as a fashion but later it becomes their need and they become so addicted that they do not give it up even if they want to. 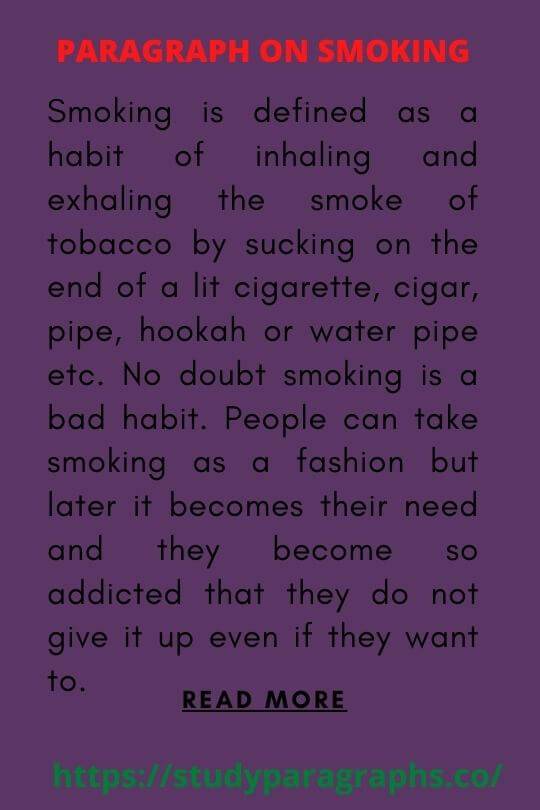 Nowadays, smoking is spreading like a plague among the younger generation. The growing trend of smoking is also very harmful to our nation and society. It is more dangerous for people than anything and a main cause of drug addiction.

The smoking materials mainly consist of tobacco that contain toxic chemicals like nicotine, lead, arsenic , radioactive elements such as polonium-210 , carbon monoxide and many others. Smoking is very harmful and dangerous for health.

There are many types of smoking like cigarettes, cigar, pipe, hookah or water pipe. A cigarette is a thin cylinder containing psychoactive material, mainly tobacco, that is rolled into thin paper for smoking .

There are more than 7,000 chemicals in cigarette smoke. Hundreds are toxic. More than 70 of those chemicals cause cancer. Cigar is also like a cigarette the difference is that in cigar a roll of tobacco wrapped in a tobacco leaf or any substance that contain tobacco.

Pipe smoking is a practice of inhaling less smoke produced by burning a substance mainly tobacco in a pipe. Hookah is also a kind of a smoking . No matter what kind of smoking you use, all forms of smoking is harmful for health.

Smoking cause many diseases in smokers. Smoking has bad effect on respiratory system, circulatory system , immune system, sexual organs , musculoskeletal system and on many other organs of body.

A person who smokes is at high risk of developing a range of diseases because his immune system not works properly. Smoking cause many diseases like cancer of the mouth, nose, esophagus, throat, lungs , kidney and stomach. It also causes heart diseases, stroke , eye diseases, diabetes and elevates many other diseases like tuberculosis, emphysema etc.

The World Health Organization estimates that the number of people who died of pneumonia in 2005 was three million and more than 7 million deaths per year.

When you need a cigarette, take a deep breath in the fresh air. Repeat the process three times a day, it will give you peace of mind. Health care professionals can help patient by prescribing cessation medication.

Comprehensive measures are needed to stop smoking, First of all, it is necessary to raise public awareness. Schools, colleges and university associations should take effective action against this abominable habit, especially among students.

Our newspapers, radio, TV channels, films and magazines should raise their voice against it and provide awareness about it. Smoking is becoming more common, especially among young boys and girls, so parents and teachers should sit down with their children and explain the dangers of smoking to them.