Short Essay On Power Of Prayers For Children

What is prayer People pray for many reasons. Someone could pray to show gratitude or to apologize. A parent might pray that their child is better, or a lover that they will be reunited soon. For some people, prayer can be a way of life, but what evidence is there that it works? In this essay I will discuss the evidence for and against prayer. 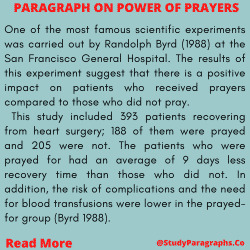 First of all, it is important to be clear about what we are discussing. There are many different ways of praying, some health-oriented, some more religious. However, I will be talking about general prayers that people do to ask or thank God. This type of prayer is commonly referred to as supplication. In the petition prayer, people ask God for something, while the thanksgiving prayer thank God for something that happened to you.

One of the most famous scientific experiments was carried out by Randolph Byrd (1988) at the San Francisco General Hospital. The results of this experiment suggest that there is a positive impact on patients who received prayers compared to those who did not pray. This study included 393 patients recovering from heart surgery; 188 of them were prayed and 205 were not. The patients who were prayed for had an average of 9 days less recovery time than those who did not. In addition, the risk of complications and the need for blood transfusions were lower in the prayed-for group (Byrd 1988).

Although Byrd’s experiment is one of the best-known examples of a study in which prayer had a beneficial effect, it has been criticized for a number of reasons. A major criticism is the fact that the sample size used was too small and therefore not statistically significant. However, this does not mean that the results of Byrd’s experiment should be discarded altogether.

There have been many other studies that have looked at historical data rather than new data. For example, Spilka et al. (2003) the results of 47 previous studies with over 500,000 test subjects. They found that these studies had a small but significant effect on the group being prayed for (Spilka 2003).