Natural disasters are the unforeseen occurrence of events or catastrophic events that causes harms to society. It is a dangerous events that could cause injury , loss of life or damage to property. Ever since man came to this earth, man has faced various natural calamities at different times. 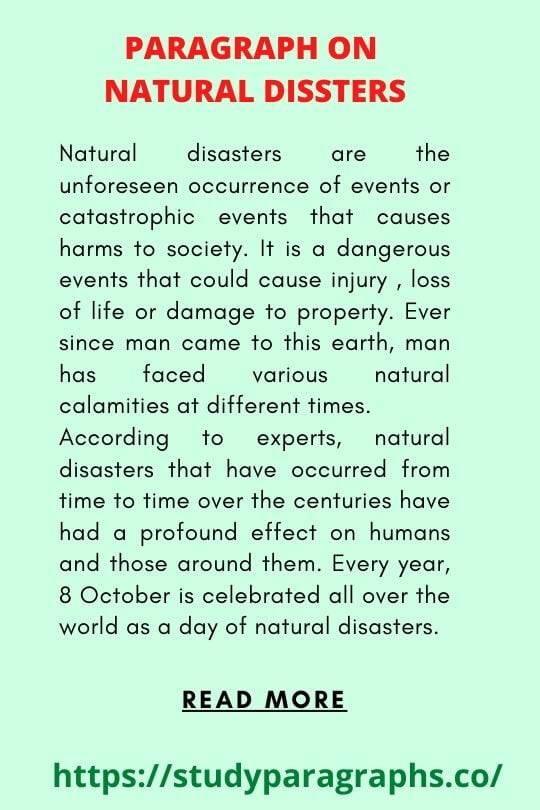 According to experts, natural disasters that have occurred from time to time over the centuries have had a profound effect on humans and those around them. Every year, 8 October is celebrated all over the world as a day of natural disasters.

In order to provide information to the people and make them aware of what to do in the event of any difficult or natural disaster. How to protect themselves in the case of natural disasters. Scientists around the world have researched about the causes of these disasters and made people aware of them.

Volcanic eruptions occurs when lava or magma or hot material is released out from volcano. volcanoes emit hot lava, ash, and gas from underground. It comes up loudly. It is a system that can be slow and fast. After the eruption of the volcano, the lives of birds and animals are also affected, the birds die from the fire, smoke and heat emitted from it. Forest fires break out.

Human settlements, societies or cities are destroyed. Tambora produced the biggest volcanic eruption in 1815. It says roughly that 100,000 people died in it.

It is a prolonged period of unusual persistent of dry weather that causes serious problems such as shortage of water supply result in crops damage . A Drought can last for months or even year.

An earthquake is caused by a sudden shaking of the earth’s surface. Earthquakes cause cracks in the ground and strong tremors are felt.

According to scientists, due to the heat inside the last part of the earth, the heaviest object goes under the earth and the object which loses weight falls to the ground. As if oil is poured on the surface of the water comes. Similarly, when an object goes underground, it produces an electric current, which causes the earth’s plates to collide with each other, causing earthquakes. At the same time, many changes are taking place on the ground. For example, cracks in the ground, landslides, or the formation of mountains.

Forest fires are fires that start naturally in forest trees or in an uninhabited green area. It is common to see wildfires in the summer. Due to the heat of the sun, the dry leaves catch fire and the whole forest comes under its grip. This type of fire is found in the pine forests of our country, Uttarakhand, India.

The effects of wildfires are devastating. Which also badly affects our natural environment. Over the past several centuries, it has emerged as a catastrophe. Recently, wildfire occur in California.