Complete guidance on the topic for students and children about the impact of deforestation is provided in an essay written in simple English.

This short essay is specially written for kids’ students to build reading and writing skills.

Short Essay On Effects of Deforestation For Children And Students

Hey, My name is Sidharth. I am a high school student in News Land. For my favorite subject, biology, assignment, I have been asked by the teacher to write about the causes and effect of deforestation. As it is a very important issue related to my favorite subject, I thought it might be appropriate to share it with my best friend and other students and teachers by posting it on this website. My essay is given below. If any of you think it might be valuable for any students, please do not hesitate to share it. 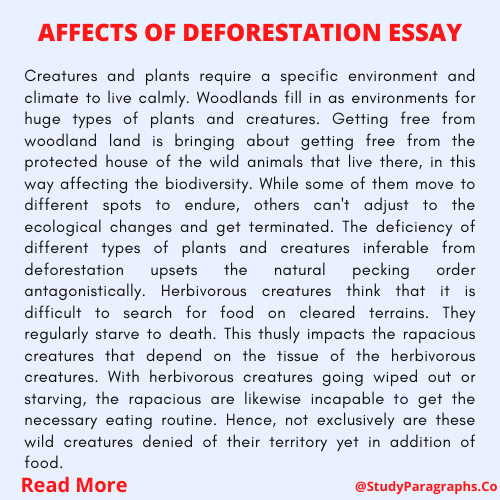 I live in New Zealand, which is a small island nation in the south-western Pacific Ocean that consists of two main landmasses, the North and South Islands and the South Island, and several smaller islands. Stewart Island/Rakiura is a famous one, and so are the Chatham Islands.

The virgin forests of New Zealand were almost destroyed 800 years ago by people who mainly came for logging. Today, only 10% of the original jungle is preserved. People are slowly starting to realize that deforestation can have many negative effects on our planet and is still a problem in some countries, especially in Africa.

Deforestation can have many effects on our biosphere. One of the main effects is a reduction in biodiversity, with a large number of species either extinct or endangered. A stable ecosystem depends on a variety of species to keep it balanced – deforestation removes habitats, forcing species to move to new areas where they may not survive. Many of the species that have been forced to relocate are unlikely to be able to adapt quickly enough, leading to their extinction (a problem particularly common in tropical rainforests).

Another consequence of deforestation is soil erosion. As soon as trees are felled and the land is no longer used for anything else, there is no one left to take care of it; it is simply left to decay. The soil becomes dry and washed away when exposed to a lot of rain, especially after deforestation has taken place in a mountainous area where heavy rains are frequent. This causes huge problems, such as landslides, which can kill people and destroy communities.

Many of the world’s staple foods come from rainforests, such as bananas and rice. When deforestation takes place, the land can no longer produce these crops, which means that people will have to find food from other areas, such as neighboring countries. This leads to international problems such as famine and shortages that can lead to wars and refugee crises. The best example is what happened in Sudan.

Another bad effect of deforestation is the release of carbon dioxide in high quantities, which contributes to global warming. Carbon dioxide is created when we use wood instead of other materials like metal or plastic to build houses and furniture or burn firewood for cooking and heating. Trees absorb carbon dioxide from the air and convert it to oxygen, so deforestation has a direct impact on the increase in carbon dioxide levels in the atmosphere, which contributes to the greenhouse effects that lead to increased rainfall and temperatures. This can lead to the complete loss of rainforest and increased desertification, which has a major impact on people’s lives (e.g. Darfur and Somalia).

As mentioned above, deforestation also contributes to climate change. It reduces the ability of our atmosphere to release heat into space, resulting in global warming that leads to natural disasters such as floods droughts, etc.