Load shedding usually happens in the summer season in India, Bangladesh, and Pakistan. Students can read and study this short and easy paragraph on load shedding.

Discontinuation of electricity supply for some time for a short or long period is called load shedding. Normally, load shedding is scheduled in advance, but most of the time, it happens without any warning when the transmission frequency falls below.

Short And Long Paragraph On Load Shedding For Students

It has become a major problem and part of our daily lives. Nowadays, it causes interruptions in all circles of life. The electricity crisis literally paralyses a country and makes the lives of its citizens a living hell. Load shedding in any country is due to the fact that there is a lack of management and foresight by the government of that country. 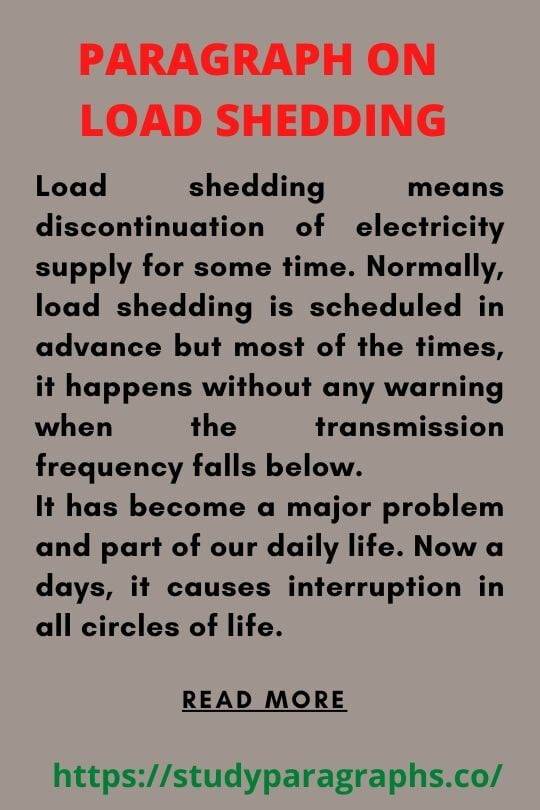 The shortage of electricity is damaging our industry, commerce, and agriculture. In mini industries, there is no alternative source of electricity, so when load shedding starts, these industries stop their work.

Factories are unable to provide enough production to meet the requirements of the market. To cope with this problem, the industries that are working on a large scale use generators to run machinery. However, this raises the total cost of production.

Because of load shedding, it is impossible to do surgical operations in hospitals. Sometimes, power goes off during the operation, and it results in the loss of human life.

The area of education is also being vastly affected by the electricity crisis. Students especially suffer because of load shedding. Due to extensive hours of power shortage, they suffer a lot, especially in exam season, and cannot give proper time to their studies.

Most of the Pakistani economy depends on agriculture, but due to load shedding, tube wells and other machines cannot work. Because of this, a water problem occurs, which damages the crops.

There are many contributing factors behind load shedding, including:

2. Our existing dams are losing their ability to store sufficient amounts of water for electricity generation.

3. The use of electricity increases in the summer because of the overuse of coolers, air conditioners, and refrigerators.

3. The entire nation suffers from indiscipline. People use as much electricity as possible. Lights are always “on” in malls, hotels, and streets, even during the night hours. This practice does not only increase power consumption but also generates maximum heat energy, which makes the environment uncomfortable.

3. Measures; how to Control Load Shedding

We can save a lot of energy by adopting some measures:

In the presence of load shedding, progress is not possible in any country. That is why the elimination of load shedding is very important for the social, economic, and moral progress of a country.

The load shedding in Pakistan is a part of the daily life in the country. This is because there are times when the power must be shut off to maintain the continuity of the supply of electricity. In some areas, this can happen multiple times each day. This can cause a number of problems for people who are using electrical appliances.
The load shedding in Pakistan is a very common occurrence. It is one of the main reasons why certain parts of Pakistan have low reliability of power supply. There are also several issues with this that create challenges for people and businesses that depend on electricity for their livelihoods. Some of these challenges include disruptions to essential services such as hospitals and schools, as well as damage to equipment and property due to disruptions in power supply.

Load shedding in summers is a very common problem in India. This results in your house not getting enough electricity, which can cause several problems. The main one is that you won’t be able to keep your home cool or warm as much as you want. This will make you uncomfortable, and it could also cause health issues. So, make sure you know when load shedding occurs so that you can plan ahead.

In addition, load shedding during the summer months could result in people using more energy for air conditioning and other appliances. This means that someone else will have to pay for those extra bills. Therefore, it’s important to reduce demand whenever possible to avoid paying more than necessary for electricity.

Other ways to save energy during the summer include checking your thermostat to make sure it’s set at the right temperature and taking shorter showers. You could also invest in solar panels if you have the money available.

By Load shedding is meant sudden reduction of power supply to a grid. It is usually caused by an excess of generation capacity, which leads to an imbalance between supply and demand. The system attempts to correct the imbalance by decreasing the load on the grid, most commonly through turning off non-essential equipment. This is often done so that more power can be produced as soon as possible.

Load shedding happens when there is not enough power available in the grid to meet demand, which causes the electricity supply to be reduced temporarily. This can happen when there’s too much generation taking place or because of outages in transmission and distribution systems. It can cause problems for people using appliances and electronic devices, such as computers, mobile phones and televisions, but it also affects businesses that use large amounts of power for equipment such as factory automation and refrigeration systems.

Load shedding refers to the process of closing power plants or other power sources that can produce electricity when demand exceeds supply. A load shedding strike is an intentional interruption in service due to lack of supply, usually for short periods of time.

There are two major types of load shedding:

1. scheduled and unscheduled. Scheduled load shedding occurs when a set amount of electricity is removed from the available supply, usually during peak times. Unscheduled load shedding occurs when there is not enough electricity to meet demand at any given time. Both types result in reduced availability and may have negative consequences for the public.

2. Improving the reliability and efficiency of power generation could help reduce the need for load shedding strikes as well as mitigate their effects on public health and safety (especially where there are vulnerable populations). Encouraging more users to adopt smart devices can also help reduce demand by using less electricity.